Many of my class attendees know that I love zoodles. The rest of you are asking “WHAT is a zoodle?!” It’s short for zucchini noodle: a spaghetti or fettuccine-like noodle made with that delicious green summer squash. I’ve been planning on making a zoodle recipe for Indigikitchen for a while but I was hesitant to do the classic “spaghetti and meat sauce” replacement (though I probably will some time in the future). While thinking about what else I could do with zoodles, I thought about Thai food and how many ingredients come from this continent or could be substituted for things from here. Even your basic Pad Thai sauce contains vinegar, red chilies, garlic, cayenne pepper, and fish sauce. I kept this recipe as simple as I could and used a store bought garlic chili sauce instead of individual chilies and wild garlic, but it could be done. I used maple vinegar even though your typical sauce uses rice vinegar. Use what you have on hand. Fish sauce was the part that I debated using for a while. Even though many nations did ferment fish, it’s not like the fermented anchovy sauce that you can buy in the store. That said, I’m not sure this dish would be the same without it. I used a store version and perhaps I’ll try my hand at fermenting fish later. 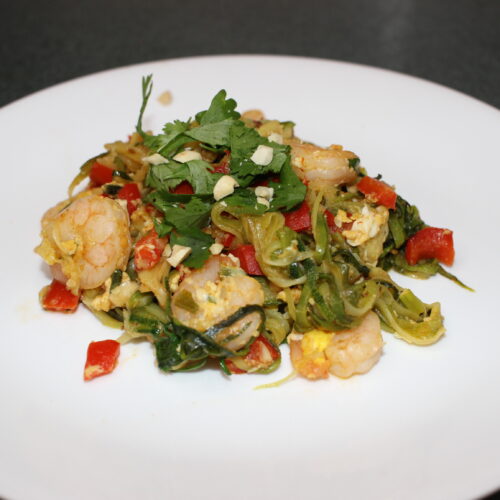 For the zoodle pad thai